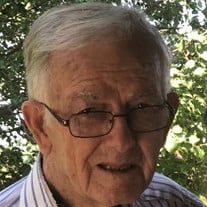 Arnold Freeman affectionally known from childhood as “Tincey” and by his daughter Teresa who called him “Perky” went to be with the Lord Saturday, February 1, 2020. He was born in Oklahoma on August 27, 1929 to the late James Freeman and Cordia Curtis Freeman. He was a Mechanic and a Cattle Farmer for many years near Big Flat, Arkansas. For several years they owned and operated grocery stores in Big Flat and in the Round Mountain community. He was a board member of the Round Mountain Community Church for many years. He is preceded by his parents, two sons, Larry and Edward Freeman, brother Lloyd Freeman, sister Beulah McClanahan and granddaughter Misty freeman. He is survived by his wife of 71 years, Jewel Mize Freeman, son, Ricky Freeman (Brenda), two daughters, Brenda Treat (Doug) and Teresa Taylor (Charles), daughter-in-law Sue Freeman, all of Big Flat, sister Clara Ramsey (Hugh) of Mountain View, ten grandchildren and 14 great grandchildren. Funeral services 10 am Tuesday February 4, 2020 at the Round Mountain Community Church with burial in Freeman Cemetery. Pallbearer are Ricky Freeman, Chad Freeman, Clint Freeman, Charles Taylor, Darrell and Jeff Ramsey.

The family of Arnold Freeman created this Life Tributes page to make it easy to share your memories.

Send flowers to the Freeman family.