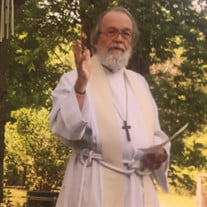 The Rev. Dr. Arnold Withrow Hearn died at age 93 on December 16, 2019. He was born February 22, 1926 to Walter Anderson Hearn and Olive Barthenia Withrow Hearn in Suzhou, China where they were Missionaries with the Methodist Episcopal Church South. Arnold returned to the US with his parents, settled in Columbia, Missouri, graduated from University High in 1943 and got his B.A. from the University of Missouri in 1946. He continued his education at Union Theological Seminary in New York, NY receiving his MDiv. in 1949 and his PhD from Columbia University in New York in 1961. Arnold was a third generation Methodist minister and begin preaching while he was in High School. He served on the Centralia Circuit in Missouri while in College having charge of four rural congregations until he graduated and moved to continue his training. Arnold served as Pastor of St. Luke's Methodist Church in the Bronx, New York but in 1953 began his academic career teaching at Union Seminary, New York, NY; Princeton University, Princeton, NJ; Bangor Theological Seminary, Bangor, Maine and Episcopal Seminary of the Southwest in Austin, Texas. Arnold became an Episcopal Priest in 1966 as he moved to Texas from Maine. In 1975 he left academic work, moved to Arkansas and became a Guide for the US Forest Service at Blanchard Springs Caverns in Mountain View. He decided in 1979 to return to Parish Ministry, moved to Heber Springs and became Vicar of St. Francis Episcopal Church until 1987. In 1987 he moved to Marianna to become Rector of St. Andrew's Episcopal Church until he retired in 1994 and moved back to Mountain View. In retirement he served as a Missionary Chaplain at St. Andrew's Episcopal Church, Cherokee Village from 1994-2003. After he retired from this position he continued to do long term interim supply work in Harrison, Jonesboro, Newport, Helena, Heber Springs, and Marianna. He officiated at his last service at St. Andrew's in Marianna in the spring of 2019. He also returned to work as a tour guide at Blanchard Caverns in 1997 and continued to lead tours until he was 89 years old. At this point he is the oldest person to regularly lead tours at Blanchard. Arnold is survived by his wife of 45 years Mary Patricia (Tricia) Davis Hearn, three sons, two daughters, eleven grandchildren and five great grandchildren, nieces, nephews and great nieces and nephews and many friends. Memorial services will be at St. Andrew's Episcopal Church, Marianna, AR on Friday, January 17 at 2:00pm. In lieu of flowers memorials may be made to St. Andrew's Church PO Box 241, Marianna, AR 72360 or Arkansas Community Foundation of Lee County 130 Robertson Marianna,AR 72360.

The Rev. Dr. Arnold Withrow Hearn died at age 93 on December 16, 2019. He was born February 22, 1926 to Walter Anderson Hearn and Olive Barthenia Withrow Hearn in Suzhou, China where they were Missionaries with the Methodist Episcopal Church... View Obituary & Service Information

The family of Reverend Dr. Arnold Withrow Hearn created this Life Tributes page to make it easy to share your memories.

Send flowers to the Hearn family.