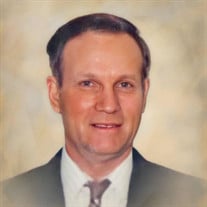 Burlin Ray Burroughs, of Greenbrier, AR, was born on October 23, 1942 in Bee Branch, AR to Nymph Eldon Burroughs and Opal Mae (Edwards) Burroughs Tanner and passed away Thursday, May 12, 2022 at the age of 79. He graduated from Ouachita High School in 1960 and was a key member of the 1959 Ouachita Warriors Arkansas state champion basketball team. He married the love of his life, Lynda Evonne Wright, on August 27, 1965 in Bryant, AR. He served in the Army Reserve for six years and was honorably discharged. Burlin retired from Reynolds Metals Company in 1989 after twenty-six years of working in several locations, including the Bauxite plant which closed in the 80s and in Bristol, VA. He and Lynda built two homes in Bryant over the years and remodeled homes in Glen Rose and Damascus. He is survived by his wife of 56 years, Lynda, of the home; his daughter Konni Hall and her husband Joe, of Ozark, MO; his mother, Opal Tanner, of Little Rock; two brothers, Charles Burroughs (Mary), of Moore, OK and Lonnie Burroughs (Sharron) of Bryant, AR; three grandchildren, Ian Hall, Grace Hall and Eli Hall, of Ozark, MO; six nieces, one nephew, and numerous cousins, great-nieces and great-nephews. He was preceded in death by his father, Nymph, and his grandparents Albert and Ollie Burroughs, Earl Edwards, and Oscar and Neoma Burroughs and many cousins and friends. The family would like to thank the staff of Hospice Home Care of Conway and their Comfort Care Center in Little Rock for their assistance as Burlin passed from this world to the next. Visitation will be Monday, May 16 at 1pm at Bishop-Crites Funeral Home in Greenbrier with the funeral service following at 2pm with Dennis Brock officiating. Interment will be at Old Salem Cemetery in Gravesville after the service. Online condolences may sent to the family at bishopcritesfuneralhome.com

Burlin Ray Burroughs, of Greenbrier, AR, was born on October 23, 1942 in Bee Branch, AR to Nymph Eldon Burroughs and Opal Mae (Edwards) Burroughs Tanner and passed away Thursday, May 12, 2022 at the age of 79. He graduated from Ouachita High... View Obituary & Service Information

The family of Burlin Ray Burroughs created this Life Tributes page to make it easy to share your memories.

Burlin Ray Burroughs, of Greenbrier, AR, was born on October...

Send flowers to the Burroughs family.