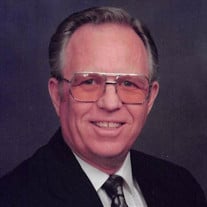 Reverend Carl Garrett Willis, 86, passed away November 15, 2019, in Conway, Arkansas surrounded by his beloved family. He was born on May 20, 1933, in Wheaton, Missouri, to John Garrett Willis and Georgia Willis. He was the oldest of 4 children. He accepted Jesus as his personal savior at age 18 and immediately knew God was calling him to the ministry. He started his ministry at age 18 and continued to preach and pastor for 57 years until his retirement in 2008. He presented the gospel with great enthusiasm and had an amazing knowledge of the Bible which was evident in his messages. He pastored 8 churches in Arkansas, Louisiana and Texas. His last pastorate was at Grace Temple Baptist Church in Arlington, Texas, from 1977-2008 and he served as Pastor Emeritus until 2014 until his move to Conway. He enlisted in the Air Force at age 19 and served as a crew chief on a B-47 bomber for 4 years. He is preceded in death by his father, mother and one sister, Mary Snell. He is survived by his wife of 67 years, Virginia of the home, son Gary Willis (Janette) of Conway, daughter Linda Knight of Midlothian, Texas, grandchildren Heather (Brian) Thomas, Ryan Knight, Kirby (Taylor) Willis, Ross (Bailey) Knight, Raquel Knight, four great granddaughters, brother James (Betty) Willis, sister Faye (Don) Kunze, and a host of nieces and nephews and extended family. Services will be held at Central Baptist Church, 3333 Dave Ward Drive, Conway, Arkansas, on Wednesday, November 20, 2019, at 10:00 am. Visitation will be held before the service at 9:00 am. Graveside service will be at Memory Gardens in Hope, Arkansas, at 3:00 pm. Memorials can be made to LifeWord Ministries, 611 Locust St. Conway, Arkansas 72034.

Reverend Carl Garrett Willis, 86, passed away November 15, 2019, in Conway, Arkansas surrounded by his beloved family. He was born on May 20, 1933, in Wheaton, Missouri, to John Garrett Willis and Georgia Willis. He was the oldest of 4 children. He... View Obituary & Service Information

The family of Carl Garrett Willis created this Life Tributes page to make it easy to share your memories.

Send flowers to the Willis family.