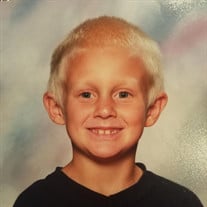 Cason Wayne Hughs, 8, went to be with his Heavenly Father on June 11, 2020, in Damascus, Arkansas. He was born on January 28, 2012, in Forrest City, Arkansas, and lovingly adopted by Elaine and Jason Hughs on December 12, 2014. A sensitive and loving little boy, Cason’s bright smile outshone even his bright blonde hair. A true lover of beauty and the arts, Cason noticed color, texture, and pattern in his surroundings; his favorite color was blue. He cared about his appearance and liked for his clothes to look nice. The artist in him loved pretty things and he would often compliment others on what they were wearing, mentioning specifically what had caught his eye. “I like your necklace,” he would say. Cason loved color, but his true passion was music. He wanted to learn how to play his guitar and he had a real talent for understanding the music. As his mother recalled, Cason could be seen snapping his fingers and happily “bebopping” everywhere he went. His love of music, however, often landed him in trouble. Dancing on the job caused him to get “fired” from his assigned chore of collecting chicken eggs due the inevitable dropping of said eggs. Cason enjoyed playing with his sisters and brother; two favorite games were playing “gangsters” and shooting his Nerf gun, and crashing his monster trucks and cars, which was especially enjoyable when his brother, Brian, got involved in the mayhem. He loved animals, especially the horses and the dog, Pepper. Other favorites were fishing, the movie Home Alone 3, and of course, Christmas. He loved school, learning, and listening to stories. When he grew up, Cason wanted to join the Army and to be a famous guitarist and Country music singer. His special sensitivity allowed him to notice when someone was sad, and he wanted to help the homeless. Cason was in the process of donating some of his own clothes and toys to the less fortunate. We love you, Cason, and we will miss you and your hugs. Enjoy running on the streets of gold and don’t wreck too much havoc in heaven! Cason is survived by parents Jason and Elaine Hughs, sisters Nicolin Chea, Rebekah and Morgan Hughs, brothers Casey Joshlin and Brian Hughs, Grandparents Roger and Angie Melikian, Burt and Sally Allinder, and Patrick and Linda Hughs, Great-Grandmother Lillian McGee, aunts and uncles Rush and Missy Cornwell (children Ashlen and Leighton), Clayton Joshlin and Amber Lindsey (children Destany, Malachi and Miles), Cameron Joshlin (children Maelin, Bracie, Kamila and Daelyn), Sarah and Randall Dodd, Mark and Phoebe Leslie (children Anna, Eli, Emilee and Malachi) and everyone who loved him. A Celebration of Life service will be held on Tuesday, June 16, 2020, at 11:00 a.m., at the Mount Olive Baptist Church in Guy, Arkansas. In lieu of flowers, please send donations to Soaring Wings Ranch in Conway.

Cason Wayne Hughs, 8, went to be with his Heavenly Father on June 11, 2020, in Damascus, Arkansas. He was born on January 28, 2012, in Forrest City, Arkansas, and lovingly adopted by Elaine and Jason Hughs on December 12, 2014. A sensitive... View Obituary & Service Information

The family of Cason Wayne Hughs created this Life Tributes page to make it easy to share your memories.

Cason Wayne Hughs, 8, went to be with his Heavenly Father on...

Send flowers to the Hughs family.