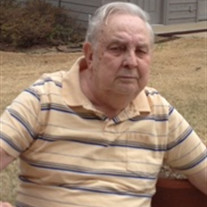 Rev. Craig Branham 85 of Springdale went to be with his Lord and Savior on Monday April 28, 2014. He was born the youngest of eight children on April 14, 1929 in Troup, Texas to E. Clint Branham and Mollie E. Johnston Branham. Mr. Branham was a retired Baptist Minister and 32nd degree Mason. He started to work at eight years old selling 'soda water' and candy bars in his father's tomato shed in Troup, TX. Mr. Branham was called to preach the Gospel of Jesus Christ at 17 years of age and pastored churches in Texas, Arkansas, and Missouri. He graduated from Troup High School in Troup, Texas, Jacksonville College in Jacksonville, Texas, Wesleyan College in Fort Worth, Texas, and attended Baylor University in Waco, TX. He moved to Arkansas in 1956, and later lived in Campinas, Brazil. Mr. Branham served in many positions in the BMA including Assistant Director of Missions for 13 years, Director of Missions for 13 years and Director of Pastor's Retirement Fund, BMA, Texarkana, over 4.5 years. In 2000 Mr. Branham and his wife moved to Northwest Arkansas to be near their children. Mr. Branham traveled around the world twice. He is preceded in death by his parents, and a son Dwayne Craig Branham. Survivors include his wife of over 65 years Grace Pou Branham, daughter Elaine Councille, son Clint Branham and sister Faye Nell Hunter.  Other survivors include 11 grandchildren, 8 great grandchildren and a host of extended family and friends. Visitation will be Thursday May 1, 2014 from 6pm to 8pm at Bethlehem Baptist Church in Greenbrier. Funeral services will be held at 11am Friday May 2, 2014 at Bethlehem Baptist Church with Bro. Marvin Lloyd, Bro. Richard Walters and Bro. James Schoenrock officiating. Burial will follow in Bethlehem Cemetery. Pallbearers will be Jeremy Branham, Clint Branham Jr., Nathan Branham, Luke Branham, Ty Clary and Doug Williamson. Honorary pallbearers will be Joshua Branham and Isaac Branham. In lieu of flowers donations may be made to the Nehemiah Project, P.O. Box 30910 Little Rock, Arkansas 72260. Arrangements by Bishop-Crites Funeral Home of Greenbrier.  (501) 679-4400 www.bishopcritesfuneralhome.com

Rev. Craig Branham 85 of Springdale went to be with his Lord and Savior on Monday April 28, 2014. He was born the youngest of eight children on April 14, 1929 in Troup, Texas to E. Clint Branham and Mollie E. Johnston Branham. Mr. Branham... View Obituary & Service Information

The family of Craig Branham created this Life Tributes page to make it easy to share your memories.

Rev. Craig
Branham 85 of Springdale went to be with his Lord...

Send flowers to the family.