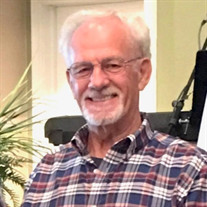 June 17, 1947 was the day in history that recorded the birth of a little blonde-haired, blue-eyed boy into the Cecil E. & Opal A. Smith family. Born in Charleston, MO, Denzil Kelly Smith joined three brothers & four sisters and became the baby forever. He attended schools in Charleston, Bell City, Advance, Fredericktown, and Marshall - all in Missouri. After high school graduation in Marshall Denzil joined the United States Marine Corps & served two tours in Vietnam. While in Vietnam his brother, Marvin, met a woman in a bank and asked her if she knew of a beautiful sweet girl who would be willing to write to his brother in Vietnam. Yes, she thought she knew the exact lady. Her name was Patricia Kissel. Patricia wrote to Denzil every day, and he looked forward to not only those letters, but also plenty of baked goods, knowing he could always count on his Patricia, (or Patty as she was later known). That started one of the most memorable and happy romances most people only dream of, and in the midst of all that correspondence, they fell in love. They finally met in January 1969 when Denzil was on leave between his first and second tour in Vietnam, and when he was released from the Marines, he and Patricia were married on June 27, 1970. Denzil recently declared, “When I first saw her I knew she was the one!”. A few years after their marriage, Denzil & Patricia became involved in a church where they completely gave themselves to God, serving faithfully for many years. He was Sunday School Superintendent, serving under Pastor Tim Dugas and was his “right-hand man” for several years before their move to Jonesboro, AR. There they again served faithfully in a local church. Their final move included a mountaintop in Omaha, AR where they built their forever home on 25 acres with a lookout view for miles. Once again Denzil & Patricia immersed themselves in a local church, Christian Life Center, as faithful saints. . Denzil played bass guitar and both were involved in every church fundraiser and function. If something was happening, they were there - Always Faithful. Four years ago, Denzil was diagnosed with a terminal illness. He changed his diet, he exercised, and he prayed and believed for his healing. God gave him four additional years to enjoy life and family. Although he did everything within his power to fight he recently decided he was getting tired and wanted to go on to be with Jesus. This became his goal. He longed to see his mom & dad, Naomi, Marvin, and Pete along with others who preceded him in death. Denzil is survived by his wife of 49 years, Patricia Ruth (Kissel) Smith. Four children: Timothy Cecil (Kristie) Smith of Branson, MO, Jason Fredrick, (Elizabeth) Smith of Melbourne, AR, Theresa Kelly Smith (Rev. Bradley) Burns of Greenbrier, AR, Brian Joseph Smith of Bellefonte, AR; 12 Grandchildren who called him “PawPaw:” Cole Smith, Christopher, Peyton, Sean and Naomi Smith, Bryce, Zachary and Kinley Burns, Lacie, Noah, Seth and Jessica Smith. Also surviving are two brothers, Leamon C. Smith of Peoria, and Melvin (Joyce) Smith of Marine, IL, three sisters, Auldeane (the late Rev. Charlie) Cates of Bonne Terre, MO; Sue (Rev. Thomas) Jackson of Branson, MO and Annette (Jim) Bisbee of Saint Charles. Visitation will be at Christian Life Center, on Sunday, February 16, 2020 from 5:00pm to 7:00pm. Funeral will be at Christian Life Center, on Monday, February 17, 2020 at 10:00am. Burial will be at Tucker Cemetery in Doniphan, Missouri. Please send flowers to Coffman Funeral Home in Harrison.

Customized sympathy cards. Mailed for you.