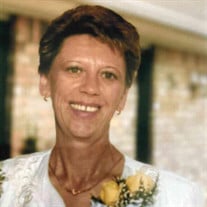 Dottie J Dye Cox passed away on 7th of May 2022, she was born 24th of January 1952 at Sedalia, Missouri. The youngest child of the late George and Lesetta Dye. Dottie served 12 years in the Unites States Air Force where she obtained the grade... View Obituary & Service Information

The family of Dottie Jean Dye Cox created this Life Tributes page to make it easy to share your memories.