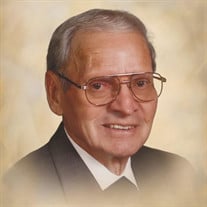 Elmer Eugene "Gene" Gambill passed away on August 31, 2021, in Conway Arkansas at the age of 94. For the past 28 years, he has made Greenbrier, Arkansas his home, where he lived with his beloved wife of 74 years, Barbara Arlyn (Mitchell) Gambill. Together the couple had four children, along with 9 grandchildren, 19 great-grandchildren, and 2 great-great-grandchildren. Born April 14, 1927, Gene was the fourth of five children born to Elmer and Clara Gambill. The family lived near Palatka, Arkansas. Most of Gene’s youth was spent in rural Clay County. His fondest memories were of the years spent on the family farm near Datto, Arkansas. In early 1945, at the age of 17, he enlisted in the US Navy and served as a Third Class Petty Officer in the final weeks of WWII. Not long after his discharge, he met his lifelong companion, Arlyn. After the couple married he dedicated his life to the full-time service of God. For over 65 years he served as a minister in the Baptist Missionary Association (BMA), working as an interstate missionary, state missionary of Arkansas, and director of missions for the BMA of Missouri. He also served as pastor for numerous churches in Missouri, Arizona, and Arkansas before retiring in 2015. A quiet and unassuming man, Gene never sought notoriety and was most content to serve without acclaim or fanfare. He was friendly and affable and conversed easily with strangers, but he always listened more than he talked. He had a gentle, easy-going manner and was respected and well-liked wherever he went. He never grumbled and rarely uttered a complaint for he was always physically robust and mentally resilient. He was fair, honest, and supremely conscientious. Diligence characterized all of his endeavors and his strong work ethic earned him the admiration of his family and peers. Gene was also a skilled craftsman and carpenter. Wherever he lived he built and remodeled homes and churches. He preferred the outdoors and relished physical labor. In his spare time, he liked to garden and fish. He enjoyed tinkering with motors and electrical devices and was a licensed ham radio operator. Gene was a musician who also enjoyed singing both publicly and privately. The duets he sang with his wife Arlyn were always popular in the churches he served. He loved Sunday afternoon drives in the car. His penchant for exploring unfamiliar towns and country roads meant that he was never inclined to take the same route twice. He never cared much for movies and TV but he did enjoy old TV westerns and the evening news. He liked to be silly and goofy. He was frugal, and could not bear to throw away an extra nail, nut, or bolt. To him, every spare part held the promise of a vital future use that could save a dime or dollar. He was fond of old cars, planes, and trains, never losing his childhood fascination for steam locomotives. He loved and admired his children and grandchildren. He was tender-hearted toward animals; he was fond of dogs and especially cats but loathed snakes. Aryln’s desserts were his favorites and he was particularly fond of her Italian cream cake and coconut cream pie. But more than anything else, he just preferred her company; being with Arlyn was always the best place to be. Gene was preceded in death by his parents, Elmer and Clara Gambill; two brothers, Winfred and Mid Gambill; one sister, Rozzie Gambill, and his youngest daughter, Ann Marie Gambill. He is survived by one brother, James Gambill of Paragould; his wife Arlyn Gambill of Greenbrier; two daughters, Donna Clark of Benton and Carol Haynes of Bono; along with one son, Michael Alan Gambill of Greenbrier. Funeral services for Gene will be held at 1:30 PM on Friday, September 3, 2021, at Immanuel Baptist Church in Greenbrier, Arkansas with visitation beginning at noon. Burial will be at Thorn Cemetery in Greenbrier.

Elmer Eugene "Gene" Gambill passed away on August 31, 2021, in Conway Arkansas at the age of 94. For the past 28 years, he has made Greenbrier, Arkansas his home, where he lived with his beloved wife of 74 years, Barbara Arlyn (Mitchell) Gambill.... View Obituary & Service Information

The family of Elmer Eugene "Gene" Gambill created this Life Tributes page to make it easy to share your memories.

Send flowers to the Gambill family.