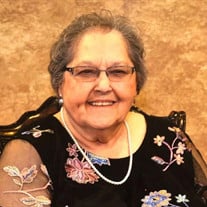 Grace Pou Williamson Branham, 92, of Springdale, Arkansas passed away on February 4, 2022. She was born in Carthage, Texas on August 12, 1929 to the late Henry and Lucy Williamson. Grace Williamson and Craig Branham were married on July 3,... View Obituary & Service Information

The family of Grace Pou Williamson Branham created this Life Tributes page to make it easy to share your memories.