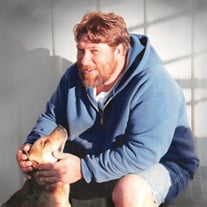 Gregory Wylie Sallis, 56, of Greenbrier, Arkansas passed away on December 5, 2020. He was born in North Little Rock, Arkansas on April 26, 1964 to Richard and Velda Sallis. Greg was preceded in death by his father, Richard; his brother, Robert Sallis; and three sisters, Rosemary, Anna and Patricia. He is survived by his daughter, Megan Sallis, husband, Logan. His daughter, Ashely Tackett; and grandson, Chase Parks. His son, Warren Verner, and wife, Elia, and grandson Jerry. His mother, Velda Sallis. His brothers, Guy Sallis, wife, Roseanne. His brother, Gerald Sallis, wife, Donna. His brother, Richard Sallis. His sister-in-law, Angela Sallis. His nieces, Paige Engle, Alex Sallis, Renee Sallis Hudson, Venetta Bloom, Rose Sallis, and Nanette Sallis. His nephew, Kurt Sallis; along with a host of family and many dear friends. Greg had a great sense of humor, loved to laugh, and was a very hard worker. He had an infinite love for Jesus and his family. Greg also had a love for all animals and was passionate for raising horses for the last 33 years. He started an animal rescue in 2011 and never went anywhere without a good dog by his side. He trained horses and dogs for his customers and friends. Greg always said that his greatest joy in life were his children. Memorial service will be at 3:00pm on Monday, December 14, 2020 at Crossroads Cowboy Church in El Paso, Arkansas with Pastor Ron Riddle officiating. Memorials in lieu of flowers may be made at any FirstSecurity Bank Locations to the Greg Sallis Memorial Fund, or mailed to FirstSecurity Bank, PO BOX 363, Greenbrier, Arkansas 72058.

Gregory Wylie Sallis, 56, of Greenbrier, Arkansas passed away on December 5, 2020. He was born in North Little Rock, Arkansas on April 26, 1964 to Richard and Velda Sallis. Greg was preceded in death by his father, Richard; his brother, Robert... View Obituary & Service Information

The family of Gregory Wylie Sallis created this Life Tributes page to make it easy to share your memories.

Send flowers to the Sallis family.