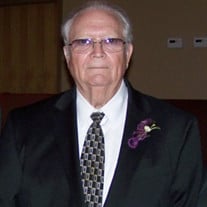 Bishop Harold G. Anderson was born May 1, 1942 in Big Flat, Arkansas to the late Ralph Anderson and Grace Treat Anderson. He went to be with the Lord peacefully on Tuesday May 21, 2019 in Jonesboro, Arkansas. He was surrounded by his family as the presence of the Lord filled the room, and he was escorted by angels to his eternal home. After graduating High School, he enrolled in Arkansas State Teachers College, now University of Central Arkansas in Conway. Later, he earned his master’s degree in Theology from Lighthouse Christian College & Seminary of Beebe. Harold was a Carpenter, Minister, and Christian School Administrator. In October,1963, he was joined in Holy Matrimony to the love of his life, Sandra Sue Robinson, who has faithfully been by his side for more than fifty-five years. In 1976, they moved to Lake City, Arkansas to build a church which today is thriving as the Pentecostals of Lake City. He served as Pastor for forty years. His body could not continue, but his heart was still involved until the end of his life. He had a heart for missions and taking the gospel to foreign lands, and traveled to Mexico, Jamaica, Brazil, Haiti, and the Philippines. He was instrumental in raising untold thousands of dollars for foreign Missionaries and the spreading of the gospel to those who have never heard the gospel. He is survived by his wife of fifty-five years, Sandra Sue Anderson; four sons, Bruce (Sandra), of Hot Springs, Gregory (Rita), of Jonesboro, Kent (Geneda), of Tennessee, and Ryan (Alicia) of Lake City; ten grandchildren, JuliAnn Merrick (Doug), Trent Anderson (Adrian), Bradley Anderson (Samatha), Kayla Anderson, Cheri Duff (Ryan), Megan Anderson, Alex Anderson, Cameron Anderson, Clara Anderson and Madden Anderson; four great-grandchildren, Aiden Merrick, Sophia Anderson, Tatum Anderson, and Avery Anderson. Other survivors include sister, Fredia Kay Ragland (Donald) of Marshall; two brothers, Gary Anderson (Kathy), of Russellville, and Dennis Anderson (Susan), of Royal, Arkansas. Harold is preceded in death by his parents and sister Regenia Anderson. Services are 1:00 pm Saturday at the Pentecostals of Lake City church in Lake City, 307 Cobean Ave., with Reverends Dennis Anderson, Gary Anderson, and Tony McCall officiating. Visitation will be from 6 to 8 pm Friday at the church. Burial will follow at Lake City Memorial Cemetery. Pallbearers are Trent Anderson, Doug Merrick, Brad Anderson, Cameron Anderson, Ryan Duff and Jeremy Catron. Honorary pallbearers are Rocklan and Harrison McCall. Memorials may be made to the Pentecostals of Lake City, P. O. Box 507, Lake City, AR 72437.

Bishop Harold G. Anderson was born May 1, 1942 in Big Flat, Arkansas to the late Ralph Anderson and Grace Treat Anderson. He went to be with the Lord peacefully on Tuesday May 21, 2019 in Jonesboro, Arkansas. He was surrounded by his family... View Obituary & Service Information

The family of Bishop Harold Gene Anderson created this Life Tributes page to make it easy to share your memories.

Send flowers to the Anderson family.