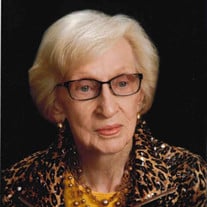 Mary “Helen” Pruitt, 94, of Greenbrier, Arkansas went to be with Jesus on August 28, 2021. She was born February 27, 1927 in Wynne, Arkansas to the late William Forrest Anderson and Gertie Marie Maupin Anderson. Helen was a long-standing member of Immanuel Baptist Church. She was the oldest active member in the church. She is most easily recognized by several generations of children that came through the Kool-Aid line at vacation bible school. Being known as the “Kool-Aid Lady” brough a smile to her face. She held many roles over the years. One most noted in the community was a co-owner and proprietor with her husband of Frosty Acres Drive-in where she knew folks by their name. They, of course, came for her fresh home-made pies. Helen loved many things in her life, but Arlis Coleman was the love of her life who she married January 15, 1946. They were married for 46 years before AC was taken to Heaven suddenly. She has lived every single day since then waiting to see him again. She was also preceded in death by a grandson, John Robert Pruitt; a daughter-in-law, Peggy Louise Pruitt; 2 sisters, Sara Fowler and Leta Norquest and 3 brothers, Arthur Anderson, Bob Tapley, and Sonny Tapley. She is survived by one daughter, Judy Stell (Louis) of Conway; one son, Don Pruitt of Greenbrier; 4 granddaughters, Stephanie Hart (Terry) of Greenbrier, April Pruitt of Greenbrier, Heather Teague of Conway, Jennifer Bradley (Aaron) of Cabot, Lana McKinney (Danny) of Missouri, and Lance Stell of Denard; seven great grandchildren, Misty Goff (Jeff), Josh Hart (Rebecca), Kayla McElyea (Jeff), Brett Hart (Lindsey), Courtney Medina (Adrina), Arlie Pruitt, Hunter Bradley, Millie Teague; 8 great-great grandchildren; one brother, Jack Tapley (Mary) of Ozark, Missouri; two brother-in-laws, Hulon Pruitt (June) and Hollis Pruitt (Sandra); one sister-in-law, Pearlene Kitts (Charles) and many nieces and nephews. In lieu of flowers, please make memorials to Immanuel Baptist Church in Greenbrier, Arkansas. Funeral will be held at 11:00am on Wednesday, September 1, 2021 at Immanuel Baptist Church in Greenbrier, with visitation one hour prior; burial will follow to Thorn Cemetery with Brother Gaylon King and Brother Freddie Mark Wilcox officiating.

Mary &#8220;Helen&#8221; Pruitt, 94, of Greenbrier, Arkansas went to be with Jesus on August 28, 2021. She was born February 27, 1927 in Wynne, Arkansas to the late William Forrest Anderson and Gertie Marie Maupin Anderson. Helen was a long-standing... View Obituary & Service Information

The family of Mary Helen Pruitt created this Life Tributes page to make it easy to share your memories.

Mary “Helen” Pruitt, 94, of Greenbrier, Arkansas went to be with...

Send flowers to the Pruitt family.