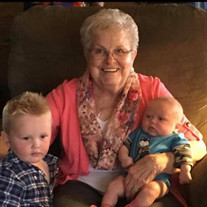 Patricia Ann Iberg, 76, of Greenbrier, Arkansas went to her heavenly home on December 12, 2018. She was born to Doc May and Mary Lee May in Greenbrier, Arkansas on January 22, 1942. Pat was a 50+ year member of the Greenbrier First Church of Nazarene. She was devoted Christian, mother, grandmother, and great grandmother. Pat had a zest for life and lived to serve Christ. She faithfully served Greenbrier Nazarene for many years through playing the piano, singing in the choir, and through 35+ years of serving on the church board. Her parents, Doc and Mary Lee, were charter members of the church. She leaves behind a host of close friends and family, including the “Blue Haired Ladies” who accompanied her on countless Branson trips and were her “partners in crime” for many years. Pat spent her childhood traveling, living in Oregon, California, but spent most of her life living in Greenbrier, Arkansas. She retired in 2002 from a long career at the Post Office. Her love for others was very evident in her life. She made everyone feel welcome, and leaves behind this legacy of love for her family, friends, and church to follow. She is proceeded by her husband of 52 years, Herman Lloyd Iberg. “Mawmaw” and “Paw” first met each other at a baby shower, and are now united once again to continue their story together. She is also proceeded by her brother, James May; and sister, Cathy Furgerson. Pat is survived by brothers Jack and wife Mary May of Atkins, Arkansas; Rodney and wife Linda May of Tyler, Texas; children Craig and Gayla Iberg of Greenbier, Arkansas, Roger Iberg of Greenbrier, Arkansas, Gayla A. Iberg of Greenbrier, Arkansas; grandchildren Misty and Bill Nelson, Stormy Iberg, Stoney Iberg, Evan Iberg; great grandchildren, Rance Nelson, and Ryle Nelson; and host of friends, nieces, and nephews. Visitation will be Saturday, December 15, 2018 at 10:00 a.m., Service to follow 11:00 a.m. at Greenbrier First Church of Nazarene with a burial to follow at the Thorn Cemetery with Brother Steve Thrasher officiating. Pallbearers are Stoney Iberg, Evan Iberg, Bill Nelson, Keith Woodrome, Paul Woodrome, Jason Furgerson. Honorary pallbearers are Jim Sanders, Tim Carter, Ronnie Garrett, Larry Johnson, and Larry “Jumpy” Hartwick.

The family of Patricia Ann Iberg created this Life Tributes page to make it easy to share your memories.

Patricia Ann Iberg, 76, of Greenbrier, Arkansas went to her heavenly...

Send flowers to the Iberg family.