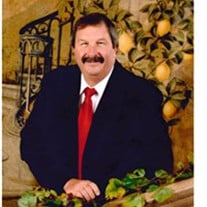 Paul Leon Wilcox Jr. AKA Papa Bear, age 58 of Greenbrier, Arkansas passed away on April 4, 2018 at Baptist Medical Center in Little Rock, Arkansas. He was born in Deming, New Mexico on April 12, 1959 to Paul Leon Wilcox Sr. and Dorothy Oneta Wilcox. Paul is survived by his wife of 5 years, Valerie Shawn Wilcox; his parents Dorothy and Ratis Yeager of Greenbrier, AR and Paul and Carol Wilcox of Greenbrier, AR; His children Zack (Tara) Wilcox of Oppelo, AR, their children Keenan and Aria Wilcox, Alex (Coty) Wilcox of Greenbrier, AR, and their daughter Paisley Wilcox and Geoff Ross of Conway, AR; his brothers Dubby Wilcox, his children Jayme (Cody), her son Gage, and Jordan Wilcox; Kevin Yeager, Ted Davis(Taletha), sisters Debbie Freeman (Pete), Donna (Brad) Beck, children Brandon and Brittney Beck; Edwina Davis and Connie Brown as well as many other family members and friends that loved him as family. He was a loving and very proud father, grandfather, and family man spending most of his free time playing with the grandkids, enjoying time with the in laws Gary, Pat, and Keith and other family members. Paul had an enormous heart, a love of jokes and pranks; a laugh that was loud, joyful, and contagious; children and adults alike gravitated towards his energetic personality. He coached his boy's little league baseball, loved golf, basketball, four-wheeler riding, hunting, and fishing.  Paul enjoyed playing poker, going out on the water, and being in nature.  He attended Greenbrier High School, graduated in 1977, and played basketball at Central Baptist College in Conway, AR.  He worked briefly as a lifeguard at the Shiloh pool in Little Rock, AR, and worked sales for years at Brownell Electric, TMC Communications, and A+ Answering Service.  Paul was the owner/operator of Yeager Transport Incorporated in Greenbrier, Arkansas and had a passion for his business and the families he served.  He was saved and baptized at Grace Baptist Church in South-West Little Rock by Lynn Baxter in 1983.  In most recent years, he attended Bethlehem Baptist Church in Greenbrier, AR. He touched many hearts, will be extremely missed and never forgotten. Visitation will be held Saturday April 7th from 6-8 pm at Springhill Baptist Church. Services will be held at Springhill Baptist Church, Sunday April 8th at 2pm. Burial will follow the funeral at Springhill Cemetery.  In lieu of flowers a donation can be made to Southern Christian Home in Paul's name, you can contact them at 501-354-2428 100 West Harding Street, Morrilton, AR 72110 or to the American Heart Association, you can contact them at 501-375-9148 909 West 2nd Street, Little Rock, AR 72201

The family of Paul Wilcox Jr. created this Life Tributes page to make it easy to share your memories.

Send flowers to the Jr. family.