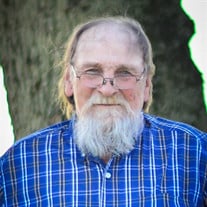 Quinton Hershel Spears Jr., 67, of Greenbrier passed away Sunday, August 19, 2018, peacefully while at his home. He was born March 24th, 1951, to the late Quinton Hershel Sr. and Emma Athelene (Kuykendall) Spears. He was also preceded in death by a sister, Bonnie K. Moix and a brother Gary B. Spears. He was a hardworking man beginning work at the age of 14 hauling hay with his brother, Gary. They worked hard, saved their money, and bought a used Rambler car, of which they drove until the wheels fell off. He played on Greenbrier’s first football team as a defensive tackle. He went into carpentry work after graduation and continued this profession until he retired. “Junior” as he was known to his family and friends, was a quick-witted prankster who loved to get a rise out of others. Survived by his two children, Jason Karl Spears and daughter-in-law Jennifer Spears as well as daughter, Emily (Spears) Duncan; six grandchildren: Jayden, Adalyn, Kaylee, Jamie, Avery, as well as joyously awaiting the arrival of his expectant grandchild, Emma. In addition, Junior, leaves behind two older sisters Mary K. Davis of Greenbrier and Donna F. Hawkins of Conway. Serving as pallbearers will be Justin Spears, Wesley Spears, Sammy Smith, Danny Moix, Mark Goodman, and Robert Lee Staggs. Visitation will be held at Bishop-Crites Funeral Home in Greenbrier on Wednesday, August 22nd at 6:00-8:00 pm. Funeral Services will be at 10:00 am, Thursday August 23rd at Bishop-Crites Funeral Home with Bro. Freddie Mark Wilcox officiating. Burial to follow at Copperas Springs Cemetery in Guy, Arkansas.

Quinton Hershel Spears Jr., 67, of Greenbrier passed away Sunday, August 19, 2018, peacefully while at his home. He was born March 24th, 1951, to the late Quinton Hershel Sr. and Emma Athelene (Kuykendall) Spears. He was also preceded in death... View Obituary & Service Information

The family of Quinton Hershel Spears created this Life Tributes page to make it easy to share your memories.

Send flowers to the Spears family.