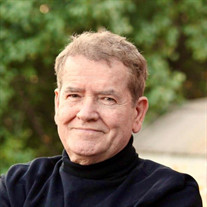 Ralph Nish Lowe Sr., who caught the world’s largest fish and had a spot-on knack for singing Elvis songs, has left the building! In the days leading up to his appointment with God, he kept asking if the Super Bowl was on. Thankfully he was in a deep sleep by the time the Rams played the Bengals. The son of small town coal miner and a pioneer spirited woman, Elmer Mack and Lahoma (Simpson) Lowe brought him into the world on October 26, 1938. Although his birth certificate listed October 23 as his birthdate, his mom insisted that she knew what day he was born, after all, she said, “I was……there.” Although his 8 other siblings (Richard, Robert, Raymond, Roy Ronald, Randy, Shirley, and Sandy) may have clouded her memory. Making his way from the coal mines of Kentucky, Ralph found Sharon Lee Moodie in Detroit, Michigan. Sharon loved his baby face, but challenged him to a good fight each day for the 60 years they were married. Ralph Lowe Jr. and Jennifer Lowe-Church were proud to call their hero, Dad. Dad always wanted to be his own boss, so in 1986, he took his family from the suburbs of Chicago to beautiful Lake Norfork, Arkansas. Owning and operating The Whispering Deer Resort, Ralph made countless friends, ran his trot-lines, and found peace in nature “down at the dock.” Like most older men, he found his way to the coffee shop, to tell stories about the past, and complain about politics. Dad had a way with words and finally got his life story,Through the Eyes of a Child, published so the world would know he had passed through. This short memorial doesn’t do his story justice, having been “everywhere” and seen “everything.” Those that knew him truly loved him. The void is deep for us, but we know that he finally got the winning Powerball ticket at the Gates of Heaven. A going-away party will be hosted when the weather is warmer and the fish are bitin’.

Ralph Nish Lowe Sr., who caught the world&#8217;s largest fish and had a spot-on knack for singing Elvis songs, has left the building! In the days leading up to his appointment with God, he kept asking if the Super Bowl was on. Thankfully he... View Obituary & Service Information

The family of Ralph Nish Lowe Sr. created this Life Tributes page to make it easy to share your memories.

Send flowers to the Lowe family.