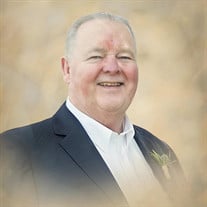 Richard Granville Walker, 74, of Greenbrier, AR, passed away on September 30th 2021 after a valiant battle with esophageal cancer and pneumonia. Richard was born on January 13th, 1947 to Bernice Granville Walker and Phyllis Marie Richard in Edinburg, TX. After graduating high school, he enlisted in the United States Army in 1965 as a Medic, serving in Tong Du Chon, South Korea. Upon receiving an honorable discharge in 1968, Richard attended Southwest Texas State University using his GI Bill, earning a Bachelor’s Degree in Business Administration. After graduation, he got a job working for the Marathon Letourneau Company in South Texas. He married Barbara Jan Downing in 1975, going on to have three children; Ryan, Ross, and Christina. Although their marriage eventually ended, they continued to support each other and their children, remaining on good terms all the way up until Richard’s passing. In 1988, he moved to Minnesota with his family, kicking off a 23 year career as the Resident Engineer of Facilities Construction at the Northwest Airlines World Headquarters. After retiring from Northwest, Richard spent his time relaxing, taking road trips to various casinos and landmarks, and visiting his children and grandchildren. There was also the occasional pachanga down in South Texas with his old buddies Ben, Jay, Randy, Bob, Tommy, and Houston. Dad never shied away from hard work, from driving the water truck at his own father’s construction company, serving as a Medic in the Army, being a Den Leader for his sons in the Boy Scouts, seemingly endless travel and time away from his family while at Northwest, to supporting his children with guidance and advice throughout his life. While he has passed onward and inward through the pearly gates, he will not be forgotten. Richard was predeceased by his parents and his brother, Jack. He is survived by his former wife Barbara; his three children, Ryan, Ross and Christina; and his seven grandchildren, Heather, Emily, Richard, Catherine, James, Max and Bexley. A funeral service with military honors will be held on October 6th 2021 at 12:00 a.m. at Arkansas State Veteran’s Cemetery, 1501 W Maryland Ave, North Little Rock, AR 72120. In lieu of flowers, please consider a donation to either the Wounded Warrior Project or the Veterans of Foreign Wars.

Richard Granville Walker, 74, of Greenbrier, AR, passed away on September 30th 2021 after a valiant battle with esophageal cancer and pneumonia. Richard was born on January 13th, 1947 to Bernice Granville Walker and Phyllis Marie Richard in... View Obituary & Service Information

The family of Richard Granville Walker created this Life Tributes page to make it easy to share your memories.

Send flowers to the Walker family.