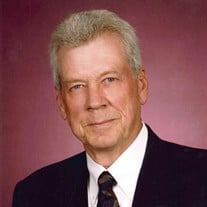 Robert (Rob) Linn Robinette, 80, of Conway Arkansas, passed away on Sunday, January 13, 2019. He was born March 1, 1938 to the late John and Lyda (Bush) Robinette. Rob graduated from Conway High School in 1956. He received a Bachelor of Science in Biology from the University of Central Arkansas and a Master’s Degree in Environmental Sciences from East Tennessee State University. Rob married Jacqueline L. Oates on February 13, 1966. They were married 52 years. Rob retired from the Arkansas Department of Health after 30 years, beginning his career as a county health inspector and retiring as a Bureau Director. During his long tenured career, he made many friends and many memories. He was known as an avid hunter who spent many hours in the Arkansas woods hunting turkey, deer, duck, etc. If it had a season, he would hunt it! He was also active in sports; he lettered in track in college and played Men’s Fast Pitch Softball for many years. He loved the pitcher’s mound, where he spent many hot summer days. He was fortunate to play ball with several of his brothers on the Robinette’s Jewelry team (sponsored by his brother George’s jewelry business). Other hobbies included digging for old bottles and gardening. After retirement, he joined the Faulkner County Master Gardeners, serving as President and ultimately earning a lifetime membership. Robert was a longtime member of the First United Methodist Church of Conway. In his later years, he could be found visiting with friends and telling stories at Van’s restaurant in Vilonia, and more recently, at Bob’s Grill in Conway. Rob is survived by his wife, Jackie Robinette; children, Kim Dell, Christie Brinsfield, and Robert (Robby) Robinette II; grandchildren, Brandon Brinsfield, Zachary Brinsfield, Jake Dell, Sam Dell, Beau Robinette, and Briar Robinette, and other family and friends. Rob is preceded in death by his grandson, Connor Brinsfield; and brothers, C.H., John Calvin, Joe, George, and Charles; and sisters Cecelia Robinette and Sarah Faye Wisinger. A memorial service will be held at 1:00 p.m. on Friday, January 18th at First United Methodist Church of Conway. A visitation immediately following the service will be held in the church’s Fellowship Hall. For those unable to attend, comments or a memory of Rob may be shared on Bishop-Crites Funeral Home website, https://www.bishopcritesfuneralhome.com/ Memorials may be given to Oak Grove Cemetery or First United Methodist Church of Conway.

Robert (Rob) Linn Robinette, 80, of Conway Arkansas, passed away on Sunday, January 13, 2019. He was born March 1, 1938 to the late John and Lyda (Bush) Robinette. Rob graduated from Conway High School in 1956. He received a Bachelor of Science... View Obituary & Service Information

The family of Robert Linn Robinette created this Life Tributes page to make it easy to share your memories.

Send flowers to the Robinette family.