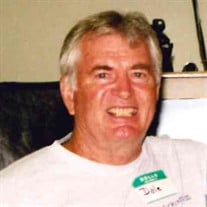 Verlon “Dale” Phillips, 81, recently of Clinton, threw down his walker and ran through the streets of glory, early on Friday, August 24, 2018. Dale was born at home, in Holland, AR, on April 1, 1937, to the late Doy and Nadine (Parsons) Phillips. He is preceded in death by his sister, Dee Greiner. He is survived by his wife of 51 years, Carolyn, of Clinton; his children, Connie (Jay) Heimann, of San Angelo, TX; “adopted” daughter, Rhonda Hance, of Greenbrier; Tonya (Steve) Wootton, of Bull Shoals; Leslie Phillips of Clinton; Lee (Michelle) Phillips of Colorado Springs, CO; his brother, Hallis (Barbara) Phillips of Clinton; grandchildren, Joshua Baber, Andrew Harris, Amber (Will) Hodges, Darren Baber, Daniel Harris, Colby (J-Me) Harris, Caleb (Melanie) Bowman, Gracie Bowman, Stone Phillips, and three great-grandchildren; several nieces and nephews, and a host of extended family and friends. Dale was a 1955 graduate of Greenbrier High School, and briefly attended the University of Central Arkansas, and the University of Arkansas at Fayetteville. He also served in the Army Reserves, as well as briefly on active duty, in the early 1960s. In 1964, Dale began working as a Production Scheduler at Ward Bus Company, of Conway, where over his 15 years, he eventually worked his way up to Vice President and General Manager of the Coachette Division. After Ward’s, Dale pursued various entrepreneurial endeavors, including a tire store, car salesman, and life insurance agent, until a “horse wreck,” as he called it, disabled him in 1989. Dale was an avid sports fan, horseman, and hunter. He played and coached men’s softball teams up into his 50s, coached hundreds of kids in community baseball, softball and basketball leagues, and enjoyed watching sports of all kinds throughout his life. Dale enjoyed riding and taking care of his horses for as long as he was able, and often had a dozen or more horses roaming his Springhill acreage. In his later years, he and his brother, Hallis, attained one of Dale's lifelong ambitions of owning a restaurant, until poor health forced him to close the doors. The Chuck Wagon Restaurant, in Bee Branch, was one of his favorite undertakings. The family would like to express their utmost gratitude to Dr. David Martin, Dr. Mary Jo Shaver, Dr. Steve Schoettle, the nurses and CNAs of Ozark Health Medical Center, Ozark Health Physical Therapy and Larry Green, Ozark Health Home Health, and Arkansas Hospice for their earnest care and assistance. A visitation will be at Bishop-Crites Funeral Home on Monday, August 27, 2018 from 6:00PM - 8:00PM. Service will be at Bishop-Crites Funeral Home on Tuesday, August 28, 2018 at 2:00PM with burial following at Oakland Cemetery in Holland, Arkansas with brother Freddie Mark Wilcox officiating.

The family of Verlon Dale Phillips created this Life Tributes page to make it easy to share your memories.

Verlon “Dale” Phillips, 81, recently of Clinton, threw down his...

Send flowers to the Phillips family.