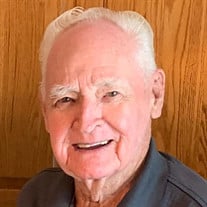 William "Bill" Wesley Barton, 90, of Greers Ferry, AR, who sacrificed for many, went home to Heaven on Tuesday, March 24, 2020 in Conway, Arkansas. He was born on September 16th, 1929 in Truman, Arkansas to Elige and Edith Barton. Bill married Donna Jo Steele, whom he loved very much, in January of 1951 in Harrisburg, Arkansas. They were married for 69 years, 2 months and 5 days. Together they raised their only child, Teresea, "the apple of his eye." He went from picking cotton as a young boy to retiring as a Maintenance Supervisor in 1984 from Northwestern Steel and Wire, where he worked for 33 years. He loved and served God at his church at Greers Ferry First Assembly of God where he was a long time member. He was the Greeter and supported his church in several areas. He enjoyed to hunt and fish. He was also a provider and helper for his family, church family, friends and neighbors. He was a strong, selfless man of God! Preceded in Death by his father and mother Elige Baron and Edith Barton Goodwin; two sisters Janet Roach and Willie Barton; daughter Teresea Diane Barton-Seidel; and three great-grandchildren Rita Perez, Carolyn and Mikal Tackett. Survived and forever remembered and loved by his loving wife Donna Jo Barton of Greer's Ferry, AR; three brothers Eligh (Irene) Barton of Sterling, IL, Alvin (Marg) Barton of Sterling, IL, and Franklin (Peggy) Barton of West Memphis, AR; Sister-in-law, Paula (Jerry) Cole, of Harrisburg, AR; Grandchildren Rich (Tara) Curtis of Dixon, IL and Aundrea (Johnny) Tackett of Greers Ferry, AR; many great-grandchildren: Jonathon and Adam Tackett, Christina Curtis, Katie (Greg) Dease, Maddison (Michael) Youngblood; and even more great-great- grandchildren: Ayden, Camden, and Jacob Tackett and Emileigh, Tripp, and Reid Dease. Private, graveside service and burial with close family and friends only. Celebration of Life to follow and be announced at a later date. Those who wish to send flowers or gifts in honor of Bill are asked by family to wait until the Celebration to do so.

William "Bill" Wesley Barton, 90, of Greers Ferry, AR, who sacrificed for many, went home to Heaven on Tuesday, March 24, 2020 in Conway, Arkansas. He was born on September 16th, 1929 in Truman, Arkansas to Elige and Edith Barton. Bill married... View Obituary & Service Information

The family of William Wesley Barton created this Life Tributes page to make it easy to share your memories.

Send flowers to the Barton family.